A poem I wrote some years ago: 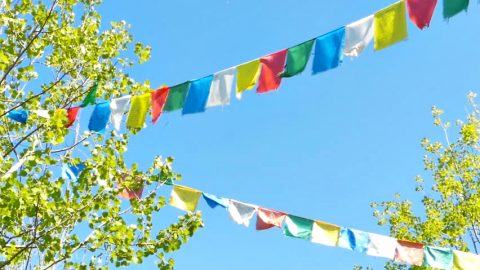 beyond the gate, the dusty path
is gently swept by the wind
prayer flags that hung serenely
now flutter

and the smell of the shore
salt and seaweed

no scrape of armor
no semblances or
verve pipes

the soughing of waves
along the wild shore

Today we remember a great American, Dr. Martin Luther King, Jr.  If anyone should wonder why this day is a National Holiday, just read the words below written by his widow Coretta Scott King on behalf of the King Center:

The Martin Luther King, Jr. Holiday celebrates the life and legacy of a man who brought hope and healing to America…       We commemorate Dr. King’s inspiring words, because his voice and his vision filled a great void in our nation, and answered our collective longing to become a country that truly lived by its noblest principles.  Yet, Dr. King knew that it wasn’t enough just to talk the talk, that he had to walk the walk for his words to be credible. And so we commemorate on this holiday the man of action, who put his life on the line for freedom and justice every day, the man who braved threats and jail and beatings and who ultimately paid the highest price to make democracy a reality for all Americans.

In light of the fact that our nation’s highest office is currently held by an unstable, uninformed, vulgar racist, I think it is all that more important that we take time today to reflect on Dr. King’s spirit.  Even though he was specifically fighting for the civil rights of African-Americans, the heart of his struggle was for the basic dignity and fundamental human rights of all people.

Dr. King did indeed walk the walk, and it cost him his life.

Finding myself in a situation where death hovers above me like a swinging pendulum of sharp steel, I am drawn even closer to Dr. King’s selfless courage, his refusal to give in to hate, fear and injustice.

On April 3, 1968 – one day before his assassination – he delivered a speech known as “The Longevity Speech”  or “Mountaintop Speech.”  His ending words are prophetic.  I think he realized that his days were numbered (perhaps he sensed that those were his final words), and if you watch the video below take notice that when he says “We’ve got some difficult days ahead,” his face takes on an emotional expression, his eyes begin to well up with tears.

As Dr. King says “Longevity has its place,” and it does.  At the same time, King knew that no life is wasted when it is lived to fight the fight for justice.  And no death untimely or tragic when it is dedicated to the welfare of others.

Well, I don’t know what will happen now. We’ve got some difficult days ahead. But it really doesn’t matter with me now, because I’ve been to the mountaintop. And I don’t mind. Like anybody, I would like to live – a long life; longevity has its place. But I’m not concerned about that now. I just want to do God’s will. And He’s allowed me to go up to the mountain. And I’ve looked over. And I’ve seen the Promised Land. I may not get there with you. But I want you to know tonight, that we, as a people, will get to the Promised Land. So I’m happy, tonight. I’m not worried about anything. I’m not fearing any man. Mine eyes have seen the glory of the coming of the Lord.

Listen to the full speech.

Watch Robert Kennedy deliver the news of Dr. King’s death to a crowd of African-Americans on April 4 just hours after the assassination.

Thich Nhat Hanh is a very popular Buddhist teacher.  Like the Dalai Lama, he is practically a one man publishing industry, he has so many books out.  Fortunately, he is the real deal.  I’ve never felt peacefulness and quietude as I have when I’ve attended one of his dharma talks.  His words, though simple and spare, are the stuff of poetry, and the wisdom he shares ‘goes beyond.’  Every thing I’ve read or heard of his has provided me with a different perspective, often on the things in life I tend to take for granted.

For instance, I like the way he describes how to eat mindfully in “Peace is Every Step,”

[We] look down at the food in a way that allows the food to become real.  This food reveals our connection with the earth.  Each bite contains the life of the sun and the earth.  The extent to which our food reveals itself depends on us.  We can see and taste the whole universe in a piece of bread!  Contemplating our food for a few seconds before eating, and eating in mindfulness, can bring us much happiness.

In 2014, Thay, as he’s called by his students, suffered a severe brain hemorrhage, a stroke.  He was in a coma for seven weeks and lost the ability to speak.  Since then, his recovery has been slow.  I believe he remains speechless but he has traveled to Thailand and his home, Vietnam.  I assume he is currently at his residence at Plum Village in France.

I’m looking forward to seeing Walk With Me, the new documentary narrated by Benedict Cumberbatch (aka Sherlock Holmes).  The filmmakers describe Walk With Me as a “meditation on a Zen Buddhist monastic community, who have dedicated their lives to master the art of mindfulness with their world-famous teacher Thich Nhat Hanh.”  The film was released into cinemas worldwide during the fall but I don’t go to theaters any more so I’ll have to wait for it to show up on cable.